Partner 14 - Ben-Gurion University of the Negev

BGU was established 41 years ago to spearhead the development of Israel's southern region. Today, BGU is an internationally recognized research university that attracts outstanding faculty and researchers from around the world with over 19,000 students. The Laboratory for Experimental Neurology and Neurosurgery includes over 30 members (mostly graduate students and research assistants) and is part of the Zlotowski Center for Neuroscience and BGU Brain Imaging Research Center (BIRC), which together include over 50 academic stuff and 150 graduate students. BIRC infrastructure includes a 3T magnetic resonance imaging (MRI) facility for human patients, several electroencephalographic (EEG) systems (including MR-compatible 64 electrodes EEG and a micro-MRI for animal studies). BIRC is a joint center of BGU and Soroka University Medical Center (SUMC). SUMC is a tertiary medical center and one of the largest and the only medical center covering the south of Israel (2/3 of the land), treating over 1000 head trauma patients annually. The BGU group has a full-equipped neuropathology laboratory, with light, fluorescent, and electron microscopy, and capacity for molecular neuropathology studies. The team has extensive experience of in vivo and in vitro models of epilepsy and seizures, with specific interest in brain immune response and blood-brain barrier permeability changes. Novel imaging methods for monitoring vessels’ permeability using MRI as well as direct imaging approaches were developed by the group and will be available for the consortium. They use routinely wireless telemetry system (16 animals can be recorded simultaneously) and a fully automated, on-line, seizure detection algorithm for long- term investigation of epilepsy modifying treatments has been developed in-house. Available are also facilities for in vitro/in vivo neurophysiology for both animal and human studies.

The BGU group has published extensively on seizures and epilepsy and specifically on the role of vascular and immune factors in epileptogenesis. The PI won the Michael prize for epilepsy research in 2007, leads different internationally funded research projects on epileptogenesis, and published on clinical and basic science aspects of epilepsy. He has organized workshops and an international conference on blood-brain barrier in epilepsy and other neurological diseases and sits on the International League Against Epilepsy Task Force on basic science. Dr Shelef is an experienced neuroradiologist with an extensive publication record. Dr. Chassidim is an engineer working with our group for over 5 years, and an expert on image processing. 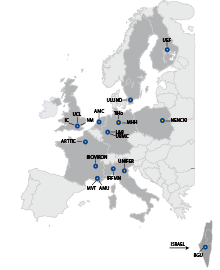